Tate House was built in 1755 for Captain George Tate (1700-1794) and his family, who had recently arrived in the Colonies from England. 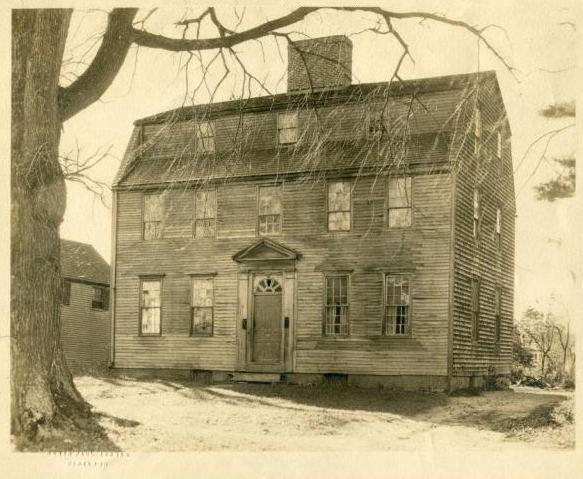 Tate served as the Senior Mast Agent for the British Royal Navy, overseeing the cutting and shipping of white pines from Maine to England. This position assured Tate’s success and his status in the community is reflected by the style of architecture selected for his home.

With its clapboards still unpainted, Tate House is one of two residences in Maine with an unusual indented gambrel roof. As the only pre-Revolutionary home in Greater Portland that is open to the public, the impressive period furnishings, beautiful grounds and herb gardens, and unique architecture of Tate House offer an insightful glimpse at the 18th century and life in Colonial Maine.

Sited on a knoll overlooking the former 18th century mast yard on the banks of the Fore River in the Stroudwater Village section of Portland, Tate House – an elegant Georgian townhouse with a unique clerestory set in a gambrel roof – was built in 1755 for George and Mary Tate and their family. George Tate, the senior mast agent to the British Navy, held a prominent position in the colonies because Britain’s naval supremacy depended on a steady supply of masts that came from logging the massive white pines in New England. By law all white pine trees over twenty-four inches in diameter were the property of the King and were marked with the sign of a “broad arrow” (three axe slashes). George Tate was responsible for the overseeing of the marking, removal, and the Fore River so they could be transported to the great shipbuilding cities in England. Like the tax on tea, the broad arrow mark came to symbolize the tyranny of the Crown and reactions to the Broad Arrow Policies (the precursor of eminent domain) helped to foment the Revolution in the Province of Maine. Tate House Museum stands as a physical reminder of the economic importance of the colonial mast trade and its role in our history as a source of the American Revolution.

Having survived the destruction of Falmouth during the Revolution and the fires that devastated Portland in the nineteenth century, Tate House is the only pre-Revolutionary home in Greater Portland open to the public. It offers area students, members of the community, and visitors from around the world an intimate experience of eighteenth-century life and gives them the rare opportunity “to connect with Maine’s colonial roots”. Because Tate House is an exceptional structure for interpreting the heritage of the United States, it is one of only 2,500 historic places in the country that has the distinction of being a National Historic Landmark. Recognizing its significance, a Historic American Buildings Survey (HABS) that records achievements in American architecture, engineering, and design first documented Tate House in 1936.